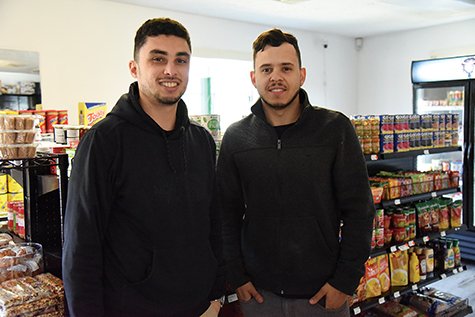 It was an idea that longtime friends Gustavo Silva and Adiles DosSantos Jr. had together. Both Silva and DosSantos Jr. wanted to be business partners when they made plans for their store TriMarket Inter-national a year before opening last Fall.

DosSantos Jr. discovered a for-rent sign driving by Mariners Way on the Edgartown-Vineyard Haven Road, much to his disbelief.

“We realized in the past years the numbers of Brazilian stores and international grocery markets have diminished on the Island, and there’s pretty much only Vineyard Grocer now,” Gustavo said. “The number of Brazilians and also Europeans and Jamaicans has grown a lot, so that’s where we first realized that the Island community needed an additional choice for these customers’ kinds of products.”

Both partners came to Martha’s Vineyard in 1998 and grew up on the Iisland. Gustavo owns and runs NuSpot Tech in business for seven years at the triangle, and DosSantos Jr. helps run his family’s hardwood flooring business.

TriMarket has recently brought in more Asian noodles like ramen, but they also carry Asian Style chips like Lay’s Yam Crisps and Stax with flavors like tomato and avocado mustard. There is an extensive selection of Brazilian snacks and candies with drinks, like Toddynho chocolate milk, and bakery items from the Brazilian Bakery in Nashua, NH.

One staple of TriMarket International is the Mr. Eats with frozen coxinhas, mini churros and bolinha de queijo. One of TriMarket’s top sellers is rice with brands like Royal Rice, Prato Fino, and Tio JoÃ£o, with a selection of frozen meats, yuca, and pamonha.

“The challenge was finding where to get everything, and then after that, we’re on the Island, so you have to deal with the ferry,” DosSantos Jr. said.

The busy days for TriMarket, according to DosSantos Jr. and Silva, are Thursdays and Fridays, especially after work hours between 4 p.m. and 6 p.m.

TriMarket International, 258 Edgartown-Vineyard Haven Road, Edgartown
Open Monday to Saturday from 9 am to 8 pm, and Sundays from 9 am to 5 pm, check out their social media pages on Facebook and Instagram: trimarketmv