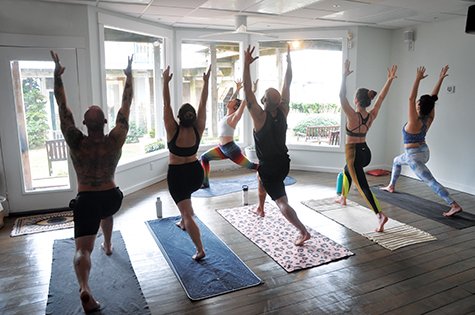 “In my physical practice, the name of my game is sustainability, I am in this for life, and so I am also absolutely obsessed with our bodies’ ability to heal and balance,” Erika Davies said while sitting next to Fulling Mill Brook.

Twice a day, Davies practices yoga and Vedic meditation, which is almost like a nap and a technique of having no technique, as Davies described it. Vedic mediation is a practice of surrendering into ease and is 30 percent more restful than the deepest portion of sleep.

Davies shoots for a thorough relaxation at the end of her hot yoga practice, telling her students to take as much time as they need in Shavasana, or corpse pose. Pranayama is a breathing technique for meditation.

“Everything is flourishing, and I am so incredibly excited about the future,” Davies said.

“I see myself as, yes, I own the studio, but it’s more of a stewardship because the studio is there for the yoga community. It exists because of the community,” Davies said.

The heat temperatures for hot yoga come from restorative infrared panels that range from 95 to 104 degrees inside Vineyard Vinyasa.

Davies has plans for Vineyard Vinyasa to offer retreats on and off-Iisland, teacher training, and yoga adventures that offer an outdoor group activity session. There will also be more diverse vinyasa offerings and the restorative yin and yinyasa offerings. On Tuesday, April 12, Davies held the first live yoga class taught in Portuguese.

“We have done so incredibly well through word of mouth,” Davies said.

Davies had learned how to do yoga from reading a book, her friend Salissa King, the owner of the Sea Spa Salon, asked if Davies had ever thought of teaching yoga, and Davies wasn’t interested at first, but King convinced her to pursue becoming a yoga teacher.

“I was practicing twice a day around 2011, 2012 and experiencing these huge shifts in my way of feeling and being in the world,” Davies said while her two dogs ran around.

In November 2013, Davies went to a yoga teaching training in Taiwan called the International School of Sivananda Yoga Vedanta, a monastic order of yoga philosophy with a heavy emphasis on science, anatomy and physiology, and asana, or the yoga fitness in preparation for meditation.

Davies returned to the Vineyard and opened a yoga studio in Edgartown called Yoga on the Square with her friend Salissa during the summer of 2014 and taught what she had learned at the Sivananda School.

“My experience at a yoga studio in Steamboat Springs, CO called Out Here Yoga, and my quasi-mentorship under a woman named Shannon Crow, who conceptualized and founded Out Here Yoga, really inspired me to create a space for the community in Edgartown.” Erika Davies said enthusiastically.

In 2019, Davies was the manager at Hot Yoga MV and loved her involvement in the Martha’s Vineyard yoga community.

Davies found herself supporting the community in Edgartown through Hot Yoga MV, but when they moved to West Tisbury around the turn of 2019, Davies wondered how to keep hot yoga in Edgartown.

“If I have the opportunity to go back to 2014 and have that sort of situation, I would know, based on my inspiration under Shannon Crow with Out Here Yoga, I would know exactly what I would want to create,” Davies said and with encouragement by her friends King and Hajjar to open Vineyard Vinyasa.

Davies and Hajjar signed the lease at Nevin Square in February before the pandemic had hit, and at the end of February, Davies got a pilon fracture from falling off a rope swing at Cedar Tree Neck. Despite the setbacks, Vineyard Vinyasa opened in July 2020 in a partnership with Hajjar with three-person capacity, which ran five classes every day of the week.

After surviving the first year of the pandemic, Hajjar and Davies decided to give Vineyard Vinyasa one more summer in 2021 and see where it went from there, but the mask mandates coming back up and down due to the risks of the new COVID-19 variants.

Davies became the sole proprietor of Vineyard Vinyasa on New Year’s Day 2022, a leap of faith meeting with an uprising in support from the island’s yoga community.