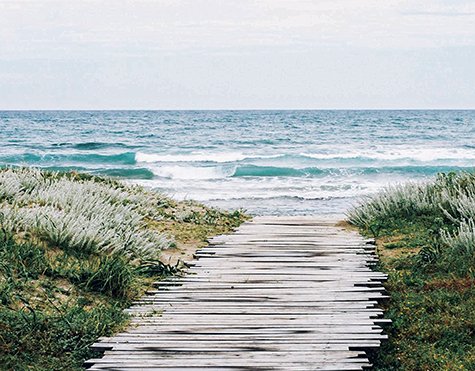 Not Looking Down, Looking Forward
The Innovative Imaginings of Vineyard FutureWorks

People support the future they help to create,” says Bob Johnston, President and Co-founder of the nonprofit group Vineyard FutureWorks. Seemingly obvious sounding. But engaging people with something as elusive as the future isn’t always easy. That’s why Vineyard FutureWorks supports collaborative innovation. As Johnston puts it, “We believe when Martha’s Vineyard embraces challenges and opportunities as one Island, we’re stronger together.” The four pillars of FutureWorks are Economic Sustainability, Environmental Stewardship, Cultural Vibrancy, and Engaging Community. This includes pressing issues like water quality, affordable housing, and food sustainability. But, as Johnston says, “We have to be, creative in the way we identify where we focus.” To do that, FutureWorks works to draw in as many Islanders as possible. He explains, “Once you have community alignment on what a preferred future is for Martha’s Vineyard, then they’re able to realize that future.” Or more succinctly: “If you’re only looking at your feet, it’s impossible to see what’s coming.”

The current pandemic may seem incongruent to an organization heavily based on collaboration. But their emphasis on innovation turns any challenge into an opportunity. Recently, Islanders formed the Discovery Team to participate in a weeklong event called the Virtual Island Summit. For the Discovery Team to get the most out of the summit, Future Works implemented the Discovery Process-- a strategy focused on rigorous collaboration and critical thinking. The Virtual Island Summit, founded by James Ellsmoors, started September 7th and saw 500 Island communities from across the globe participate in a number of interactive digital sessions. Following the summit, FutureWorks led a virtual insights meeting with the Discovery Team. The participants revealed a flood of “ah-ha” moments they had throughout the summit. “There is a myopia for communities in terms of pulling back the blinders and looking for better solutions other places,” Johnston says.

In connecting with Islands from all over, however, the team was able to associate and expand their perception of what is possible for the Vineyard’s future. Many team members were taken with the idea of electric propulsion ferriesâ€“a concept that other Islands have already put to practice. “What would that say to the Commonwealth and to the nation if when they came to Wood’s Hole they were met by electric ferries?” Johnston asks.

The hypothetical question brings to light two other possibilities for Vineyard FutureWorks. First, the need to be simultaneously looking at the immediate and the distant futures. “One of the key things that I’ve learned since FutureWorks started is that a best practice for Island and community planning is that you have one foot firmly planted in the present, and dealing with all those urgent issues that require attention and investment,” says Johnston. “At the same time, the other foot needs to be planted 20 years into the future, in order to identify what the most pressing issues will be, and then working backwards to ensure the best decisions are being made in the present.”

Secondly, there is the notion that the Vineyard is in a unique position to have a larger influence. As influential leadersâ€“presidents, corporate giants and celebrities have continued to come to the Island, we have gained increasing visibility on the global stage. “So realizing the potential and possibility of having the world view Martha’s Vineyard in that way is something we as an Island community have only begun to tap,” Johnston says.

Johnston has 40 years of experience in the world of collaborative innovation and knows that plans alone don’t foster change. “It’s using that planning to influence the action of today,” He says. Vineyard FutureWorks co-founder Dennis daRosa sadly passed away earlier this year. The two were longtime friends with a shared passion. That passion led to several grassroots meetings, which led to the establishment of FutureWorks. Now daRosa’s son, Phil daRosa, has joined the FutureWorks team. Dennis daRosa’s passion lives on through FutureWorks actionable steps towards progress and partnerships. Take the MVC’s Climate Action Task Force (CATF). The CATF is developing a Climate Resilience Plan with goals to tackle climate change impacts on the Island. “To what extent can we bring the Vineyard community into embracing those goals at the same level?” asks Johnston. Both he and the Discovery Team agree that supporting Vineyard youth plays a big part. A new program teaches Vineyard youth leaders skills for creative problem solving and then matches them with Island non-profits, where they’d utilize their learned skills to address the non profits’ challenges. Johnston says that “education is crucial. The young people are our next generation of leaders.”

As for the future of FutureWorks, Johnston shares his long term vision. He says, “I want what we are able to achieve on MV through collaborative innovation to be a model for thousands of islands around the world.” It seems his goal is already coming to fruition: Following the 2020 Virtual Island Summit, Johnston spoke with Ellsmoor’s team about the 2021 Island Innovation Summit. As it turns out, the Discovery Process used by the MV Discovery Team will be introduced to 200 people from all over who will act as Island Innovation Ambassadors for the 2021 summit. On a local level, Johnston says, “I want Vineyard FutureWorks to support any Vineyard individual or organization in realizing their own preferred future through collaborative innovation.” There’s certainly no looking down at that.

To find out more about Vineyard FutureWorks or get involved check out their web site: vineyardfutureworks.org.
They would like to hear from you.