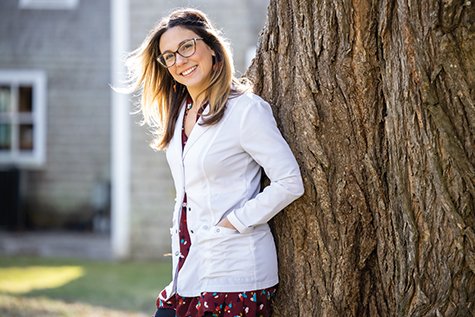 Before becoming an acupuncturist, Jodie Treloar worked in Marine Science. They may seem completely different, but in speaking with Treloar, who runs Drift Acupuncture & Wellness, the overlap becomes clear. As a hormone analyst at the New England Aquarium in Boston, she was tasked with quantifying levels of stress hormone. Her team had ideas and did lab research on variables, but the underlying takeaway was something was causing an imbalance. “So we had to figure out a way to fix the imbalance to bring back harmony in that system,” she says, and adds, “It’s the same thing within an individual.”

In fact, Treloar’s style of acupuncture, called 5 Element Acupuncture, is based on how the five elementsâ€“Wood, Fire, Earth, Metal and Waterâ€“relate to the mind, body, spirit. As Treloar puts it, “As an acupuncturist, it is my job to recognize imbalance within the patient in order to appropriately and effectively treat a wide range of conditions. The goal is to reestablish harmony within the system. Where there is harmony, there is healthâ€“just like within the earth and its many ecosystems..” She calls it a “very elegant system” because of its simplicity. “It’s working with the patients’ own energy in their bodies,” she explains. Essentially, the patients have the medicine within them. Calling herself a “qi” electrician, she says, “I simply want to make sure I’m supporting the patient’s energy, ensuring that there are no blockages, and that it is flowing throughout the body and going where it needs to go.”

The pandemic brought its own challenges. As a solo practitioner, Treloar had to take three months off. She returned to her practice in July, and has been taking all the necessary precautionsâ€“masks and PPE, taking people’s temperatures, using an air purifier. “The fortunate thing is that we’re just one on one within the office,” she says. For the most part, patients were eager, making it a fuller summer than Treloar expected. Which leads to another result of COVID: “I absolutely have people with pandemic fatigue,” Treloar says. People are carrying extra strain and anxiety, so she pays special attention to ask. Some want to talk about it, others don’t. “As a practitioner, you have to be able to bend and have dexterity emotionally and mentally,” she says. And making sure she gets care too, because she also feels the tax of it.

A big part of Treloar’s career switch had to do with how much holistic practices helped her. Though long interested in exploring a “quest for understanding who we are, what we are, why we are,” she only first learned about energy medicine in her 20s. “I hate to say alternative medicine,” she says, “because it’s not alternative, it’s in addition to.” While she’d like to see more research being done, an uptick in studies on the benefits of energy medicine shows its increasing acceptance into the mainstream. “Especially on an island like Martha’s Vineyard. People are so open minded to it.” That in conjunction with her husband joining his long-time Islander dad in business made moving to the Vineyard in 2016 a no-brainer. “Flash forward to now, my husband and father-in-law are building our new house in Vineyard Haven.” Treloar will have an office in her new home, which she hopes to be running in November. The dream is for it to serve as a sanctuary where treatment begins as soon as a patient enters. Again, it’s all about supporting balance so that patients can, as Treloar says, “show up in the world as purely themselves.” The work is gratifying. She adds, “I look forward to doing it for the rest of my days.”