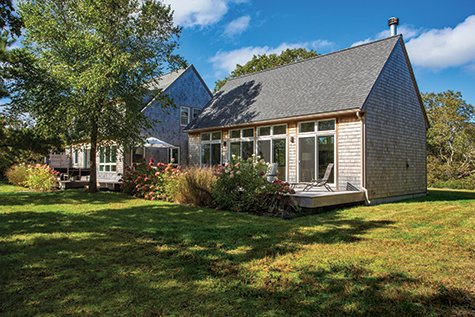 Jamie Nesbitt-Weber and Herbert Weber bought their West Tisbury home in 2013. The couple, an interior designer and an architect, had been searching for a second home that they could make their own. Both of them chose their professions at a young age. “I just liked to work with my hands ever since I was a kid,” Herb says. Jamie always knew that she wanted to be a designer. “It’s just born into you,” she says. She always liked making things and sewing, and when she was young she re-modeled her bedroom so that her bed hung from the ceiling on chains, like a swing. Both of them studied at the Pratt Institute in New York, but they met after they graduated, when Jamie was working with Herb’s brother, also an architect, at an architectural design firm.

In 1980, the young couple bought an 1860s brownstone in Cobble Hill, Brooklyn. The building had been divided into four rental apartments, one on each floor, and was void of any architectural details on the interior. “It was a complete gut renovation,” Jamie says. “We converted the interior into a 3 story triplex with a separate garden floor design office. We chose not to replicate any period mouldings on the interior except for the existing stair with original wood railings, which needed to be restored. The new design is an open floor plan with clean modern lines. The exterior faÃ§ade was restored to its natural brick and original iron railings. It was certainly a labor of love!”

Herb did most of the renovation work on the brownstone himself, but by day he worked at an architectural firm that focused primarily on large urban projects and some custom penthouses. After forty years of working life he is firmly retired, but Jamie’s business is still active. The couple’s younger daughter, Marta, followed in her parents’ footsteps. She earned a degree in fashion design, but after working in the business for a while came to her mother and said that she wanted to switch to interior design. She worked for her mother for a few years and still manages Jamie’s Instagram account. “She’s so good at it,” Jamie says. Their other daughter, Amanda, works for a consulting business in Boston, and their 1-year-old granddaughter has not yet declared what she wants to be when she grows up.

“One of the things we wanted to do with this house was to continue the family tradition,” Herb says. Herb’s parents would take him to the Cape when he was young, and later, where he and Jamie would visit with their children. They wanted a new place where their whole family could be together. They considered the Hamptons, briefly, but Jamie works there a lot and found that the trip there was often just a long traffic jam all the way to and from the city. They also considered Cape Cod, but the more remote feel of the Island drew them in. They started renting here about a decade and a half ago, and then began the search for a property to buy.

Their Vineyard house backs up on the Manuel F. Correllus State Forest, giving them easy access to the bike path and the sense of having a 5000-acre back yard. The original house was modest, but it also had a garage with a one-bedroom apartment over it, creating a small family compound. What’s more, there was room to expand. For the first two years, they lived in it as they found it, then they worked together to design major renovations, gutting the original house and adding a great room. Although Herb enjoys building things, the scope of these renovations was far more than he would have been able to do on his own. The Webers chose Doyle Construction for the project. The bedrooms were adequate to house the family, but the combined kitchen, dining, and living room felt cramped. Now, a “bridge” â€“ a short corridor with three fixed glass panels on either side â€“ connects the original house to a 735-square-foot great room.

“The great room is our favorite room in the house,” Jamie says. “It’s where we all come together to play games, do puzzles and watch TV. The two large sofas are deep and wide to invite afternoon napping.” The room is designed to be both impressive and easy to live in. “We wanted to create an environment where our family could be comfortable, so we chose stain free fabrics and rugs that were of indoor/outdoor quality.” Above that comfortable space soars a nineteen-and-a-half-foot cathedral ceiling, with an enormous spun nylon globe chandelier by Moooi hanging above the center of the room. With a 42 inch diameter, it was too big to bring in through the doors. “The contractor pointed out that it would have to be brought in before the doors went on. I’m so glad he thought of that,” Jamie says. In addition to the chandelier, LED lighting on top of the beams highlights the ceiling and provides indirect lighting.

The furnishings are all carefully chosen. “Our favorite piece of furniture in the room is the carved sideboard from Anthropologie that is reminiscent of the mid-century “Brutalist” design movement,” Jamie says. The fireplace has a strong presence, with a black natural cleft slate surround and hearth. Deep, open bookcases flank the fireplace and fill that end of the room, showcasing the family’s antiques, including a vintage tin airplane, glass jars and pottery jugs, a silver photography box with leather straps, clocks, and barware. The giant silver fish on the upper shelf is a polished aluminum Codfish from the Phillips Collection.

A new wood deck runs the length of the house at the rear, connecting it to the back yard. Although the house’s main entrance opens toward the driveway, its primary architectural facade is the one that faces the back, orienting the house to the outdoors through large windows and sliding doors. The deck jogs around a distinctive river birch tree that they wanted to be sure to keep. A planting bed runs the length of the deck, with flowering hydrangeas, ornamental grasses and Russian sage. Granite block steps that came from the Boston Navy Yard lead down onto the grass. At one end of the deck is a large outdoor shower for rinsing off after the beach. Several seating areas are arranged along the length of the deck â€“ a low table with lounge sofas from Design Within Reach, a large outdoor dining table and chairs from Vineyard Decorators, and modern black Adirondack chairs.

In the original part of the house, the living/dining area is now simply a dining area, adjacent to the kitchen. Those two functions fit well within the original space. The kitchen has white Ceasarstone Quartz countertops and modern white lacquer cabinet fronts from Vineyard Home Center. Open shelving sits on custom black metal shelf brackets to either side of the stainless steel range hood by Dirt Frog Furniture of New Hampshire. A breakfast bar wraps around to the dining area, with pendant lighting from Schoolhouse Electric hanging above. The oak dining table and bench from Crate and Barrel, with metal dining chairs from Restoration Hardware, provides a clear center for the room and a place for everyone to gather for meals.

Jamie is particular about shades and colors. “We wanted the colors on the interior to be neutral, so as not to compete with the colors of the natural landscaping around the house,” she says. “The color on all the interior walls is Benjamin Moore #01 white and the colors in the furnishings are warm grays, whites, and accents of black metal on lighting fixtures.” New wood flooring throughout the first floor of the main house, including the great room, is gray-stained 6” wide oak with radiant heating.

The art on the walls reflects the tonal scheme, tending toward modern art and black-and-white photography. Around the stairway, there are six photos taken by Herb’s father when he was a photographer in the Navy during WW II. The art in the great room includes four large feather studies by Roy Barloga, a Beach photograph by Kate Schermerhorn (over the fireplace), and four owl photographs by Leila Jeffreys. A photograph of The Reading Room in Edgartown, by local photographer Bob Avakian, hangs in the dining room, and an X-ray photograph of Crab by Nick Veasey is over the kitchen island.

Throughout, and in all of her design projects, Jamie favors a simple modern aesthetic, without clutter. “I think about architecture a lot,” she says. She uses textures and neutral tones that are easy to live with for a long time. In the places where there are more cottagey features like beadboard, it’s wider and simpler, giving it a more modern feel. Wood and basketwork contribute warmth and natural textures. Minimalist nautical touches â€“ a pair of antique gray oars over a bed, a drawing of a catboat in the dining room, and round, port-hole-like mirrors â€“ give a nod to the Island setting.

The Webers have created an Island home that is reasonably modest in scale but large enough to be comfortable for their family and express their design sensibilities. With the corona virus crisis, they’ve received many requests to rent out the house, but the family has been using it constantly since spring. They’ve been at the house more than ever this year, and they will continue to enjoy it all summer long, keeping their family together in a place that is oriented to the outdoors, with clean, livable design throughout.