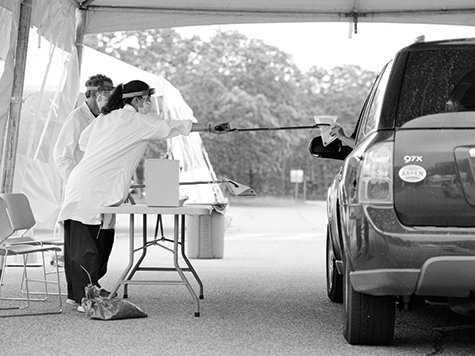 Dan Waters is capturing the moment. When the Covid-19 crisis reached the Vineyard, his camera was ready. His project, a time capsule of Island life on black-and-white film, had begun after his retirement from the Martha’s Vineyard Museum in 2017. As a retirement project, he began taking pictures of everyday life, becoming a tour guide to future Islanders and visitors. The negatives, more than 16,000 so far, will go to the MV Museum. “A museum is a time machine,” Dan says. “Its mission is to make things last forever. In a hundred years this record will be there, and they’ll know how to find it and what it means.”

Dan started doing photography when he was a junior high student. “I spent my adolescence in a darkroom, which is a perfect place to be an adolescent,” Dan says. “Those skills that I honed shooting for yearbooks in the ’60s and ’70s turned out to be perfectly suited for now.” In those days, the iconic photos of the civil rights movement and the Vietnam War, monumental events that he had just missed by being too young, impressed him. Now, he’s creating timeless images of another pivotal historical moment.

“The Covid Journal is a chapter of this larger time capsule,” he says. “I consider it to have started on March 12th, which was when we started to realize that this was not just a scare.” Signs of sudden changes started popping up all over the place â€“ handwritten signs at first, then printed ones. One week, Dan took photographs at Reliable Market, where the workers were wearing gloves but not masks, according to the then-current advice. By the time he posted the pictures to Facebook a few days later, people were demanding to know why the workers weren’t wearing masks.

Businesses shut down, plunging many households into food insecurity, and food distribution picked up to respond to those growing needs. Island Food Pantry, Family 2 Family, Serving Hands, and the Good Shepherd Parish distributed literally tons of food. “Hundreds of cars would line up,” Dan says. “If these were people on foot, it would have looked like the bread lines of the 1930s. Because of the cars, it looks different, but the spirit is the same.”

Later in the spring, the death of George Floyd brought the Black Lives Matter movement into the foreground. “I can’t keep track of how many vigils and marches there have been, even just on the Island,” Dan says. “The number of people involved has been startling. People treat a demonstration as a family occasion â€“ they bring the kids, they bring the dogâ€“but it’s deadly serious. Parents and grandparents are showing their kids how to protest.”

“The project puts my ear to the ground. I hear about a lot of photos that I should be taking,” Dan says. He has been to countless demonstrations, photographed seamstresses making masks, grocery workers, and more. He actively seeks out Trump supportersâ€“although they are few and far between, with only six people at the lockdown protest at Five Corners. But the heart of the project is everyday life, small details that are mundane to us now, but which might seem strange from a future vantage point.

“Sometimes you just have to drive around and see what hits your eye,” he says. “Photography is about being in the right place at the right time.” One day, Dan was on his way back from photographing a sign on Wing Road and decided to take a quick drive into the Highlands neighborhood. “There wasn’t much happening, but then I passed a house and there was an older couple on the porch. The wife was cutting the man’s hair.” Dan parked his car and walked up to introduce himself and explain his project. They agreed to be photographed. Out of context, the picture might just look a little odd, but it carries historical significance. “The man said he was never going into a barber shop again,” Dan reported, “although this is the first time she’s cut his hair, so I don’t know how that will work out.”

Moments like these, pictures of food lines and protests, and portraits of Islanders all come together to create a record of our times. Although Dan shares some of the images on Facebook, the true audience for this project is in the future. A grant from the MV Cultural Council financed the purchase of film for the project, including film from the Ilford film factory, which shut down during the pandemic. He chose black-and-white film for its detail and long archival life. “The product is the negatives, not the prints,” he says. “Negatives have much more information than a print does.” Museum researchers in the future will be able to zoom in and see what’s in the shadows, from changing prices at the grocery store to hair clippings on a porch.