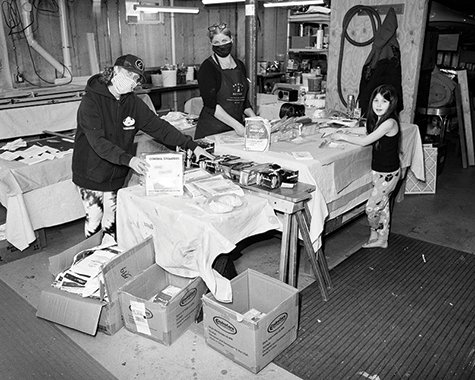 Island Volunteers Step Up
In Typical Fashion, Islanders Bond to Help Each Other

On Friday, March 13th, the mood in Cronig’s was frantic. Customers piled their carts high and whispered “corona virus” at every corner. In the weeks that followed, social distancing led to supply chain disruption, unemployment, and anxiety about infection. Amy Upton was at the store that day, and felt a need to do something to help. As a housepainter, she had a lot of paint respirators and was used to wearing them for work. When she started wearing them to stores, masks were an oddity. “Hardly anyone else had them on,” she says. In the first four or five days she got a lot of strange looks, but mask-wearing became more common, and the masks themselves were scarce.

“The first inspiration was the Cronig’s cashiers,” Amy says. “They were scared, we were all scared.” Amy’s first mission was to protect these newly emerging frontline workers. She and her friend Diana Reilly formed a group and jokingly called it the “Corona Stompers.” Diana made a Facebook page that quickly gathered hundreds of followers. A dozen seamstresses signed up, and in the next couple of months they sewed over 1500 masks, which Amy helped distribute. “My job in all of this has been to be a conduit of connections.” Amy says. “It feels really good to have something so practical and useful to do in the midst of such an existential crisis.”

On that same weekend in March, when the shutdown began, Madalena Maria Lopes founded “Islanders Help” a group that connects volunteers with Islanders who need assistance with getting groceries, childcare, and more. Islanders Help has a coordinator for each town, but as the crisis has gone on some of the early volunteers have faded away, and more are needed. Madalena worries about her ability to continue to go shopping for others three days a week after she returns to work fulltime, but she is committed to continuing the effort. “My mother used to say, ‘When you do something, you should not announce to the world.When you do something, you should be in the background,’” Madalena says. “I think we are in this world to help each other. There are a lot of people helping.”

Another group responding to the need for PPE has been the Martha’s Vineyard 3D Printers Guild, organized by Chuck Noonan of Vineyard Haven. In March, they began producing face shields using the 3D printers that were already available to them on-island. They raised money, acquired more printers, and increased production. By mid-May, they had produced over a thousand face shields, and set a goal to make five hundred more. “We’re all coming together to get people what they need to feel safe,” says Amy.

Meanwhile, existing organizations have stepped up their activities to meet greatly increased demand. Dukes County’s unemployment rate reached over 26% in May, at a time of year when it would ordinarily be 5% or less. At Serving Hands Food Distribution, distributions are now happening twice a month, from four different locations. “In the past, the numbers were pretty consistent,” says Alicia Nicholson, who coordinates the program. “In springtime, there would be about 20 deliveries and 50 people who came through the door, sometimes 80. Since the pandemic, we have consistently had close to 90 deliveries and are seeing 250-300 people coming through.” She says that the Good Shepherd Parish Feed My Sheep Program, where she also volunteers, distributed over 300 food baskets on a recent weekend.

In response to COVID-19’s impact on the Island Martha’s Vineyard Community Services has set up a web portal, Care for Community, a clearinghouse connecting volunteers and organizations. Volunteer opportunities include delivering food to the community, organizing and replenishing food storage, food preparation, providing childcare and/or babysitting, making phone calls to Islanders in need of a friend, running errands, and more. Care for Community has linked up over 125 volunteers with more than a dozen Island organizations in need. Meanwhile, MVCS is providing counseling services to support those on the frontlines of COVID-19, via telehealth.